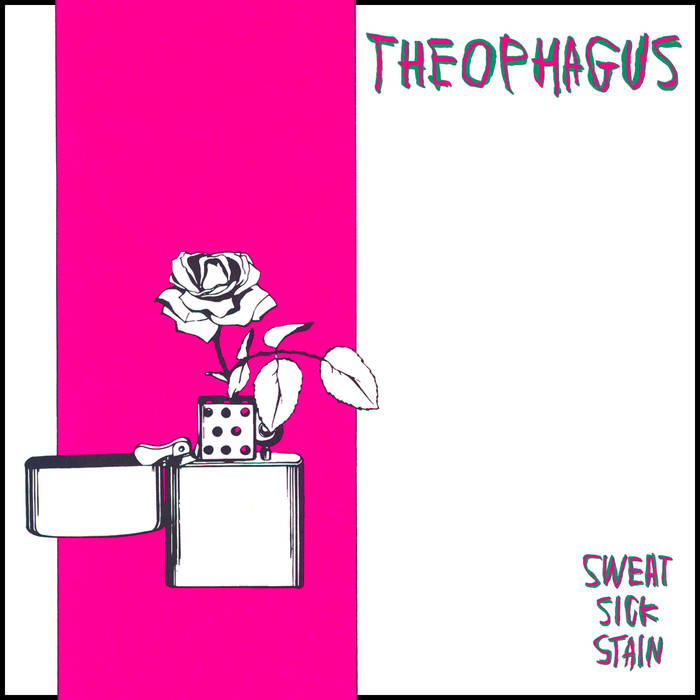 The sweet sixteenth (get it?) volume of Theophagus recordings has come out and its deb party falls on the burph'dy of its creator, namely, me. My name. All you need to know, numerically speaking, is that I started recording all of this when I was 16, and now it's the 16th volume, and that's, uh, a thing. And the last two numbers of my birth year kinda look like "16" if you squint and skew your eyes around and think about consumerism in America. The only real good news is that you'll never have to read this paragraph again.

Some pointlessly brief cameos here (and unfortunately, in some cases, instrumentationally undocumented ones) from Sacramentalian musical heroes Noah Nelson, Damian Sol, Glenn Newport, and possibly some blink-with-your-ears-and-you'll-miss-them-not-to-mention-a-career-in-a-pre-internet-circus-freak-show-as-Eaglino-The-Boy-Who-Sees-With-His-Ears others. But we know that Glenn played Metallica, Damian is the one with the violin, and only Jacob Phillips could simultaneously learn to play accordion while translating "trinke gerne viel Bier", both out loud.

And at 16, we learn the truth; not just about sick sweat stains, but:

-- Two ways to NOT play a guitar with nylon strings: for one, snapping each string outward by pinching between thumb and index finger, like picking up a questionable item of underclothing; for the other, inducing nearly undetectable vibration in the final segment of the middle finger, which may be a useful skill in the digital toolbox of who Terry Southern would have called a "master of clit-manip," but which does not belong in what your oldest and/or richest relative would call "the conservatory"...

-- How the special ability to drive a Duster until it throws a rod on the freeway, tearing a hole in the exhaust, does NOT directly translate to an ability to attempt something similar with a saxophone.... and that adding a second saxophone doesn't double your talent for the avant-garde...

-- Paul McCartney had the good grace, even at a young age, to at least pretend to be scared before dropping 'cid...

-- That when Beck released "Loser" and unknowingly gave the nod to countless suburban non-rappers to follow the Theatre of the Absurd to its conclusion in the unfortunate, irretrievably fatal Opium Den of the Silly, their labors to match every "thing" in the universe with its "ironic opposite" would eventually, by the law of averages, include items they would have to deal with themselves, if they lived long enough. In other words, I can dance to hip-hop AND I may develop osteoporosis, but at this late age only one of those things will remain ironic...

-- In the trickling-material-from-a-26-year-old-archive biz, you should never exhaust appropriate song titles early on; or all the good material, for that matter...

-- If you use a Casio SK-1 to sample the clucking of your tongue, loop it and then hold down the three F keys, three octaves apart, it sounds like a clock...

-- If you use a Casio SK-1 to sample yourself saying, "HI, MY NAME IS JASON COX," loop it and then hold down the three F keys, three octaves apart, it sounds like three of yourself each saying, "HI, MY NAME IS JASON COX," except by the time the slow one is done, the middle one has said it twice and the high fast one has said it four times. This is called "math," and NOT, as was recently quoted elsewhere by a desperate journalist living in the remains of his Maxima down by the Recycling Center, "necromancy." No one reads the paper anymore, anyway - not when I can get a reconditioned Blackberry from the Russian Mormons on Auburn Blvd...

-- I'm a year early for my stupid Janis Ian joke to land, anyway...

--That I'm tired of writing this stuff...

THEOPHAGUS is the name of the solo songwriting/recording project I began at around age 16. From 1992-2002 I recorded roughly 100 hours of material, most of it on my Yamaha MT8X 8-track cassette recorder.

This is the sixteenth in a series of archival collections. Each is about an hour long. Every song has been redigitized, rebuilt, remixed, and remastered directly from the original cassettes.

(While we at Optical Pies Recorders have made every effort possible to heighten and augment the fidelity, the quality in places might seem lacking. Probably because I was a teenager and recorded everything through crappy distortion and phaser pedals.)